Grand & Toy's Point of Origin stories are interviews with business owners in Canada who share how they turned their ideas into reality, and their evolving workplace.

From Corporate Healthcare to Custom Guitars: A Luthier Shares How Overcoming Fear of Failure Helped Him Realize His Passion

How does one go from the military, to a corporate job in healthcare, to making custom guitars? It’s not your typical career path but Michael Whitney is not your typical guy. He found his passion later in life and is now the luthier (someone who builds and repairs string instruments) behind Whitney Custom Guitars based in Summerland, BC.

“I was getting to the point in my corporate job where I couldn’t take it anymore. Fear, and being tied to a paycheck had kept me stuck, but around 2017 I decided to make the change.” 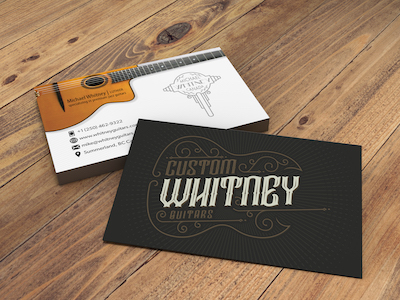 Once Michael had made his decision, everything seemed to fall into place. Being a creative person at heart, he already had a woodshop where he worked on various projects. He started to dabble in guitar making, and he quickly realized that he had found his calling. He began contacting luthiers around the world, from Vancouver to as far as Israel, to seek an apprenticeship and for advice on making a go of his newfound passion. Then, one winter, he stumbled across a small unassuming shop right in his own town with a sign out front that read ‘luthier.’

“The owner, invited me in. He sensed my fire and asked me if I wanted to apprentice with him,” Michael recalls. He ended up spending a year apprenticing in that little shop, and then enrolled in the Master Program at the Summit School of Guitar Building and Repair near Bowser, a small town on Vancouver Island (he had previously attended Selkirk music college in Nelson, BC).

Sharing his passion with others

Now that Whitney Custom Guitars is fully operational, Michael builds custom guitars and does restorations and repairs on a variety of string instruments. He is also sharing his knowledge with other up-and-coming luthiers and hobbyists by teaching a variety of guitar building courses from his workshop, aptly named, ‘Whitney School of Guitar Building.’ 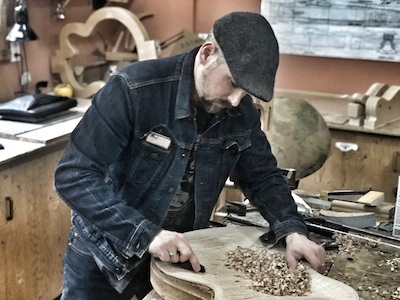 He also wants to use his new vocation to help others with a past similar to his own.

“In conjunction with guitar building and teaching, I’ve developed a program called ‘Guitar Building for Veterans,’ which will assist military veterans and first-responders suffering from PTSD and depressive disorders by giving them a creative outlet. The best part is that those very guitars can then be donated to fellow veterans. It’s reciprocal in nature—guitars for veterans by veterans.” he says. The program will offer discounts for veterans and first responders who want to try their hand at the very craft that helped him through the same affliction. “I hit a pretty dark place myself, which was further compounded over the last 12 years when I was doing something that I wasn’t aligned with internally. I want to do something that speaks to people instead of just punching a clock.”

Realizing that failure is always an option

“The biggest thing is getting out of your own way and trusting the process. It’s easy to focus on all the reasons why something might not work. I realized that the fear of failure is a big one but I was failing at what I was doing anyway; despite my ‘on-paper’ success, I was failing myself in a corporate structure that left me unfulfilled and bringing that into my home environment, which was negatively affecting my relationships. The truth is, you can fail no matter what you do, so you might as well do something you love. When I made that mental shift and decided to go for it, everything around me began to align. It’s incredible how many people and things just begin to work in your favour.”

Michael relies on Grand & Toy to deliver the supplies he needs, from the mechanical pencils and geometry sets he uses to draw his guitar designs, to the X-acto knives and adhesive he uses to aid in their construction.

“I love that it’s a Canadian company, shipping is quick, and their customer service has always been great.”

We’re honoured to have played a small part in Michael’s journey, and hope that by sharing his story, others will be inspired to follow their hearts.