Grand & Toy - Startup by Sophia - Tales from the Office

Grand & Toy's "Tales from the Office" stories are interviews with business owners in Canada who share tales of their most memorable days at work.

Is your office a spirit of innovation and set to change the world?

Well, this one is... as you know life in the office is bound to be interesting when you start your business at five-years-old and are a veteran entrepreneur by the age of eleven, with a science lab as an office. Grand & Toy customer Sophia Fairweather spends her time in 'the office' coming up with innovative ways to solve problems using the principles of STEM (science, technology, engineering and math), and she sells the resulting inventions through her online business, Startup by Sophia.

Sophia's first successful invention was Funcro (aka decals by Sophia, but it's not named that), which she created to help people avoid dropping their phones and smashing their screens. Apply one FunCro decal to the back of your smartphone and one to another surface (such as your vehicle dashboard). They will then easily stick together and hold until you decide to pull them apart. The decals can be customized with various designs or even business logos for fun promotional products.

An ever-impressive eleven-year-old scientist, Sophia has several other inventions in her catalogue, including a soap dish that saves soap suds and prevents water pollution, stickers that prevent EMF radiation from smartphones, and nano-gel windshield band aids that help prevent car accidents (check out her product demos here).

The adventures of inventing

Sophia can spend up to two months working on an invention, using the internet to research solutions along the way, and tapping into what she's learned in the various science and engineering camps and events she's attended. 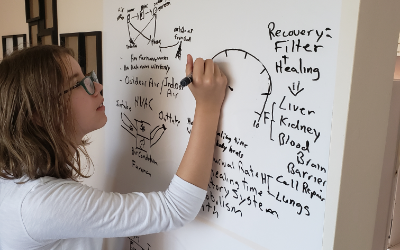 As one can imagine, this process involves a lot of experimentation, trial and error.

"With FunCro, we had problems with glue and ink getting stuck in the machines, and also cutting problems. Eventually, we arrived at our minimum viable product, which is something I'm getting to learn now."

"We were working on an icing that popped in your mouth. We got it to work the first time, but the second time it didn't work for some reason," says Sophia. "It stopped popping after eight hours, so we changed the recipe and then it lasted for 76 hours. That wasn't long enough to sell the icing. We needed better materials. The next year, Oreo came out with fireworks icing in their cookies! It would have been really cool to work with them on that." 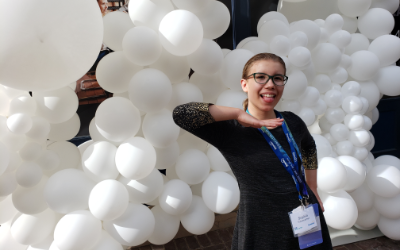 "I've had many experiences at engineering camps and events where it's more boys and men than girls and women," she says.

So far, Sophia is proving the naysayers wrong and setting a great example for other girls with her inventions, which are available for sale on her website. She's also the youngest Canadian to be sponsored by a tech incubator - Startup Edmonton.

Sophia has some advice for other young people who want to try their hand at inventing.

"It doesn't need to be anything big and flashy like a fidget spinner. It just has to be useful and not really expensive," she says. "How I come up with these things is I look at a problem and try to find a decent way to fix it, and I never let barriers get me down. Just keep moving forward and even if you fail, don't throw everything out... you might need those things later."

Essential supplies for a young inventor

Inventing new products takes a lot of brainpower, but the right supplies are also critical. Sophia counts on Grand & Toy to order what she needs to turn her visions into reality. Most recently, she ordered a whiteboard, paper and equipment to use for drafting her latest invention that she started when she was a ten-year-old.

"I have a new thing called SASS, which works with the Internet of Things. It's an air sensor system that sends data from smoke detectors and CO2 detectors to your phone. The app tells you where the bad air is coming from, what's in it, and how it will affect you."

How many eleven-year-olds, no... how many people in general can say they're creating products for the Internet of Things? Hopefully more in the future thanks to role models like Sophia.